The article is also included in its entirety below.

Jimmy Vivino — guitarist, keyboardist, music director of late-night talk show Conan and band leader for the show’s Basic Cable Band — is coming to town, joined by his fellow V3 members Mike Merritt (on bass) and James Wormworth (drums). The trio will play at the Four Friends Gallery in Thousand Oaks as part of the stellar Brogden Bay Presents concert series, put on by Steve Brogden and Larry Janss.

Locals might remember Brogden from his nearly 25 years at the Thousand Oaks Library. While there, he helped organize three different concert series hosted by the Library Foundation, from 2008 until his retirement six years later. “When I left the library, I didn’t want the music to stop,” Brogden says. “Larry heard that I was looking for a venue and offered his newly relocated Four Friends Gallery.”

Brogden Bay Presents started in 2015, with a performance by Grammy-winning guitarist Albert Lee. Laurence Juber, A. J. Croce and Corky Siegel were to follow. Not household names, necessarily, but for roots and Americana aficionados, it was an exciting lineup. And getting to see these renowned musicians in a venue as intimate as the Four Friends Gallery (it seats about 80 people) made for an unforgettable experience. 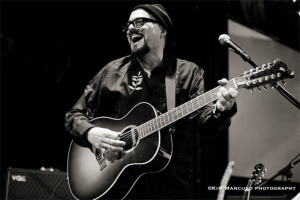 Library science and music may seem like odd bedfellows, but for Brogden, the two together create a beautiful friendship. “Books and music have been the two main interests of my life,” he says. After receiving his master’s degree in library science from the University of Iowa (he’s from Des Moines), Brogden worked as the director of the Harwood Foundation at the University of New Mexico in Taos, which also served as the public library. (It has since become the Harwood Museum of Art; the public library was moved to a new location in 1998.)

At a music festival in Taos, Brogden met Bill and Bonnie Hearne, two musicians from Austin. Not A-listers, per se, but they opened for big names like Lyle Lovett and Willie Nelson . . . and needed some help on the road. Brogden and the Hearnes became friends, and he started acting as road manager for them and other area musicians. “I agreed to do it for nine months,” Brogden recalls. “It turned into three years.”

Even when Brogden returned to his library career, he stayed closely tied to the music community. “It’s a lifelong love for me,” he explains. He has been involved with the Folk Alliance Region West (FAR-West) for some time, and started serving on the board in 2009. He has also maintained his friendships with the people he knows in the industry, even after coming to Thousand Oaks in 1990 as deputy director of the public library, and being named director in 2000.

One particular event planted the seed that would eventually mature into Brogden Bay Presents. “About eight years ago I went to a house concert put on by Renee Bodie,” he says. “She was very involved in the music industry.” Brogden was deeply impressed, and approached her about doing something similar at the Thousand Oaks Public Library. “Live at the Library” was one of the institution’s most popular events, hosting acts such as Grammy-winner Albert Lee, Grammy-nominee Perla Batalla and Vonda Shepard, familiar to many through Ally McBeal.

Brogden stayed busy even after retiring in 2014. He took courses at UCLA, did some bartending, and took on a part-time gig at the California State University, Channel Islands, Library. “I loaded myself up with a lot of stuff,” he admits. But now he’s whittled it down to the two things he loves the most: books and music. “Now I just want to focus on the music and CSUCI.”

“I think it’s important to note that Larry and I don’t do this as a moneymaking venture,” Brogden says. “We joke that on a good night we can make tens of dollars! That has actually happened on a couple of occasions. We certainly don’t want to lose money. But it’s a labor of love. Live music can be transformational, and we do what we can to present high-quality artists. It’s no longer necessary to fight the weekend traffic to go into L.A. to hear high-quality music.”

And if that high-quality music can be heard in a venue that seats 80 people or less — all the better. “I don’t know anybody who has come that has not had a good time,” Brodgen concludes.